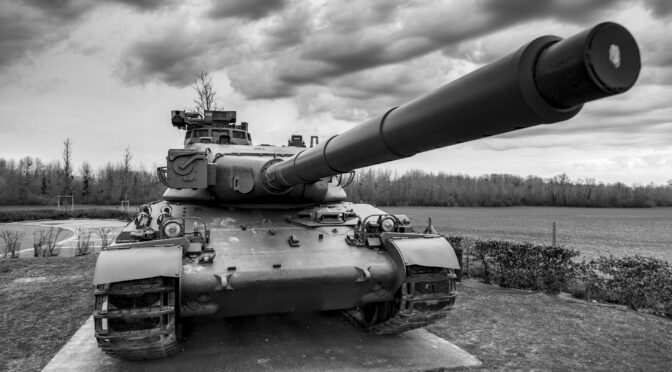 The mere word brings up images of steel beasts of war, capable of destroying vehicles, driving through buildings, and being all but impervious against normal bullets.

Tanks started out as slow, plodding, behemoths that bullets bounced off but artillery turned into flaming wrecks. Then tanks were refined, becoming faster, better armored, and with more impressive weaponry on them. There were light tanks which were fast and maneuverable. There were medium tanks with a nice blend of stout armor, dangerous main weapons, and decent speed. And there were heavy tanks which proved to be the true monsters on the battlefield. They had impressive armor and weapons that could punch through nearly all other tank armor. But they were slow and heavy.

After the second world war, tanks went through another transformation. They had improved armor and even better weapons. They weren’t as slow and sluggish. They had better equipment, allowing for them to fire their deadly weapons while moving. Armor changed to better resist the most damaging weapon types. So new weapon types were designed.

Into the future, tanks were advanced even more, with armor that previous tanks could only wish to have. Weapons were computer assisted and capable of dealing death to enemies at longer ranges. And the future tanks became faster and even more dangerous than any version before.

Eventually future tanks evolved into enormous mobile battle platforms, capable of delivering their deadly payload to target in air and space as well as on the ground. They ruled the battlefield.

Then “walkers”, or mechanized constructs (“mechs” for short) debuted and the apparent superiority of tanks was tested, and rivaled by the mechs. It was a new age, where both mechs and tanks battled it out for supremacy on the battlefield.

That’s how tanks came about, but what does this have to do with explaining them?

Well, it begins to show how tanks have changed over the limited years that they have existed. They started with weak armor, were slow and ponderous, but giant and lords of the battlefield. Then they became the back-bone of warfare, and advanced in both armor and weaponry.

But how does a person represent that in D6? Oh sure you can stat a tank and say it has 8D Toughness and is at a Scale 11. But then how do you handle the difference between that tank (say a Medium tank) and a better tank (such as a Heavy tank)? Do you put Toughness at 10D?

Okay, then what do you do when you introduce that 10D Toughness tank against a more advanced tank with better armor and better weapons? Do you increase the Toughness again, say to 14D? But then you have to increase the damage for the guns on the tank too. And then you get even more advanced tanks, futuristic tanks! What do their stats become? 18D? 20D? Where does the amount stop?

And then consider what happens when you compare a tank at 18D vs. a space cruiser with only 10D in Hull and 4D in shields. Is the tank really more powerful than a space cruiser a kilometer long? Not hardly!

That’s where some changes were made to better reflect the changes that have happened with Tanks over the years. In addition to Toughness and Scale, there are Armor ratings (which add to the Toughness) and Performance Levels (which represent fundamental improvements in either the armor or weapons of the age) to help distinguish Tanks over common vehicles.

A bulldozer might be a heavy piece of machinery, but it’s not designed for combat. It might have a Toughness of 8D, but does that mean it stands a chance against a Tank? Maybe against a man with a rifle, yes, a bulldozer is formidable, but against a Tank, there is no contest. This is where for Armor and Performance Level (PL) comes in.

Now is the armor even in the front for both the Tank and bulldozer? Not hardly. One is a blade used to push dirt around. Sturdy, yes. Thick, yes. But it’s not designed to deflect damage. The Tank armor IS designed to deflect damage. It’s angled, and made differently, so it withstands damage better. This is where Performance Level comes in. The performance of the armor on the tank is superior to the performance of the “armor” on the bulldozer. How much better would depend on when the tank was created. We’ll give this tank, being from World War 2, a slight performance edge, and give the Tank a PL of 3. The bulldozer gets no PL, as it is not designed for combat.

So now we have the bulldozer at Toughness 8D, and frontal “armor” of +2D.

That means if the bulldozer is hit in the front, it adds +2D to its Toughness rating when resisting damage.

It also has a Performance Level (PL) of 3.

We’re going to assume that each vehicle has the same weapon, doing 8D damage.

If the bulldozer hits the Tank in the front, the damage is 8D vs. 11D (PL3). Not only is the amount of damage significantly less than the resistance of the Tank with its Armor, there’s also the PL to consider. Subtract the lower PL from the higher PL. The difference between the two is SUBTRACTED from the lower PL’s roll. Since the bulldozer is a PL 0, 0-3 equals a difference of 3. So after the 8D in damage is rolled, 3 would be subtracted from the total. So it’s even more difficult for the 8D damage to affect the Tank.

And if the bulldozer hits on the side, the damage is 8D vs the Tank’s 9D (8D Toughness + 1D Armor) with a PL 3. So again, the PL comes into effect.

The bulldozer would have to hit in the rear of the tank to even have a close chance of damaging the Tank. It would be 8D vs. 8D+1 (PL3). So even with fairly equal rolls, the bulldozer would still have reduce the total rolled by 3 because of the PL of the armor.

This makes Tanks much more stout in comparison to other large or stout machinery that isn’t designed for the performance of war.

When you add in the Scale modifiers, there’s also a chance the total could be reduced even more.

But tanks aren’t just armored. They also have significant weapons as well! The main gun on a tank is designed to shoot deadly projectiles as fantastic speeds and penetrate some of that heavy tank armor.
Tank weapons use special ammunition, with armor penetrating capabilities. An Armor Piercing round fired from a tank might have the ability to defeat 2D worth of Armor. The gun might also be optimized to shoot that round with incredible speed, giving a gun its own Performance Level.

So a gun on Tank might have special AP ammunition, capable of doing 8D damage with a Penetration of 2D and Performance Level of 3.

Now, that Tank shooting at the bulldozer from the front had an advantage with special ammunition. The Tank does 8D Damage (PEN 2D) (PL3)

Now the roll is just 8D vs 8D! But the PL comes into affect here too. Comparing the PL of both, the Tank’s gun has a PL 3, while the bulldozer is still PL 0. The difference is 3, which is subtracted from the roll of the lower PL, which means the bulldozer’s resistance roll is reduced by 3. This gives the Tank a slightly better than equal chance of damaging the bulldozer FROM THE FRONT! That’s all due to the use of special ammunition which the Tank has access to.

So now the Bulldozer hitting the Tank from front is rolling 8D damage vs 11D of the Tank with PL of 3.

The Tank hitting the bulldozer from the front is rolling 8D damage (PEN 2D) (PL3) vs. 10D of the bulldozer with its armor. The Penetration removes the armor bonus, making it 8D Toughness only. So an even roll of 8D vs. 8D is made, but the bulldozer must also subtract 3 due to the Performance difference.

This shows the significant difference between a Tank and another large vehicle, such as a bulldozer, tractor trailer, or other big piece of machinery. It also shows how changes can be made in Tanks to reflect the differences in them between “light tanks”, “medium tanks”, and “heavy tanks”, as well as the differences in types and effectiveness of armor using Performance Levels. Instead of massively inflating the Toughness dice to 14D or 18D or greater, the differences are reflected with better or worse Performance Levels of armor and weaponry. Tanks of the same Performance have no better or worse chance against Tanks made in the same time period or with the same level of technology. Only when a lesser performing tank goes up against a better performing tank does it matter…or when a tank is going up against a non-tank.

Using both Armor (in addition to Toughness and Scale) for resisting damage, and Performance Level for adjusting based on technology or advancements in construction, Tanks become the thing that is feared on the battlefield and that can instill that sense of dread when the GM tells the player that they hear the squeaking rattle of the tank treads as they crunch over the piles of bones in a post-apocalyptic world of Terminator. Without heavy weapons capable of punching through some serious armor, the best option may be to run away from the steel monstrosities that are TANKS!

A System Reference Document and Development Forum for OpenD6.